Quest
Built in 1930 by Fairlie in Oakville, Canada, the 8m Fife Quest came to French & Webb in 2010 for a major structural rebuild.  Her ballast was removed and restored by Mars Metals.  The plank keel, floor timbers, and frame ends were all replaced. 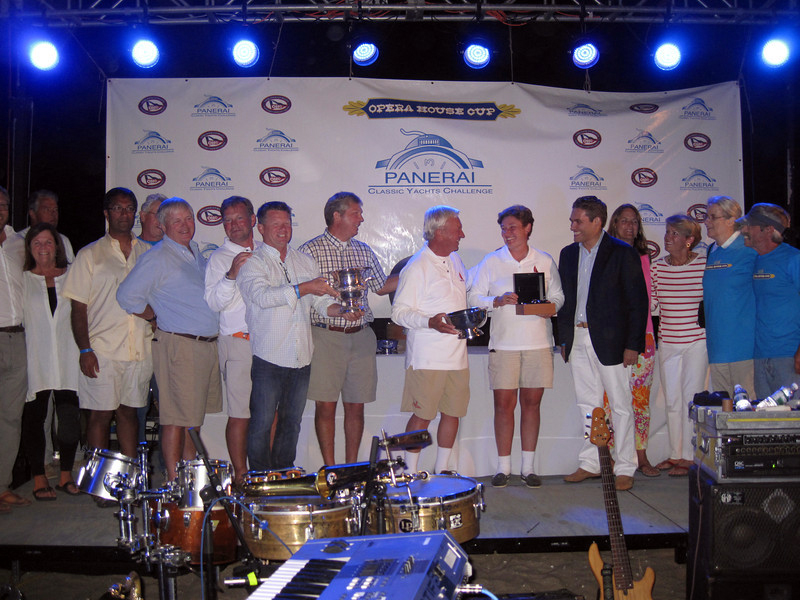 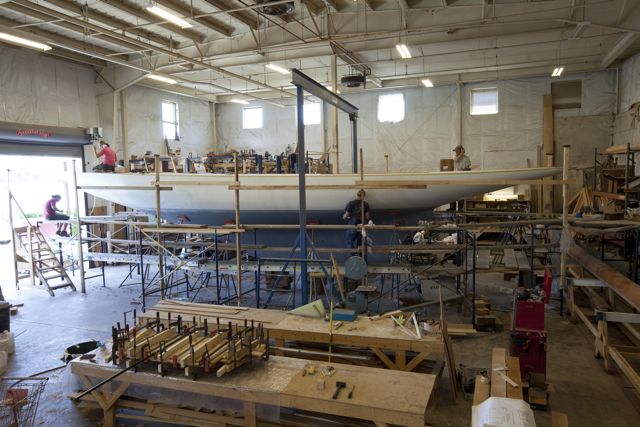 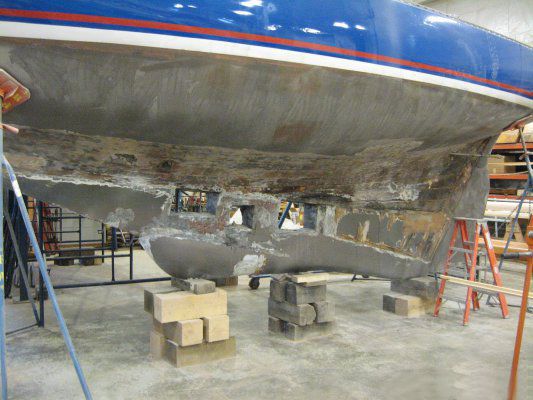 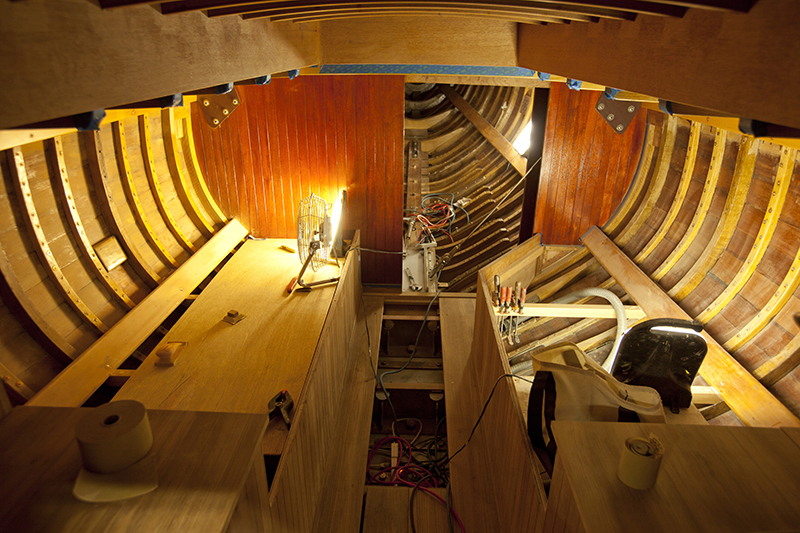 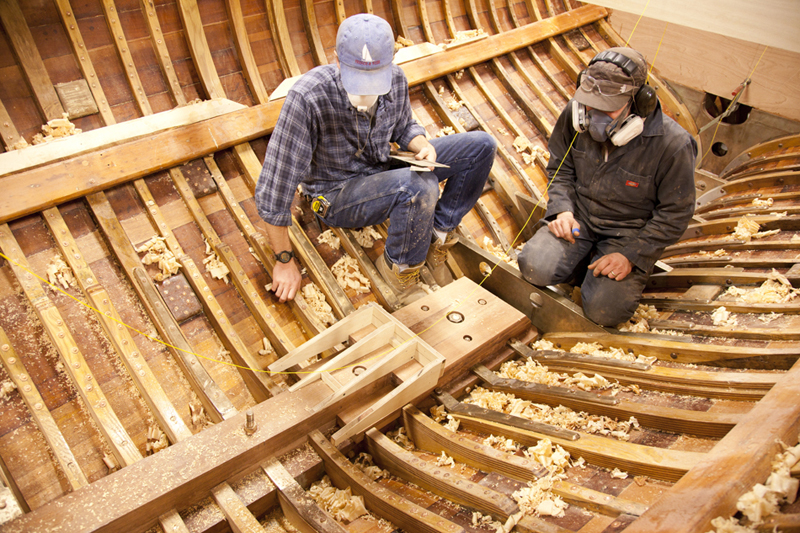 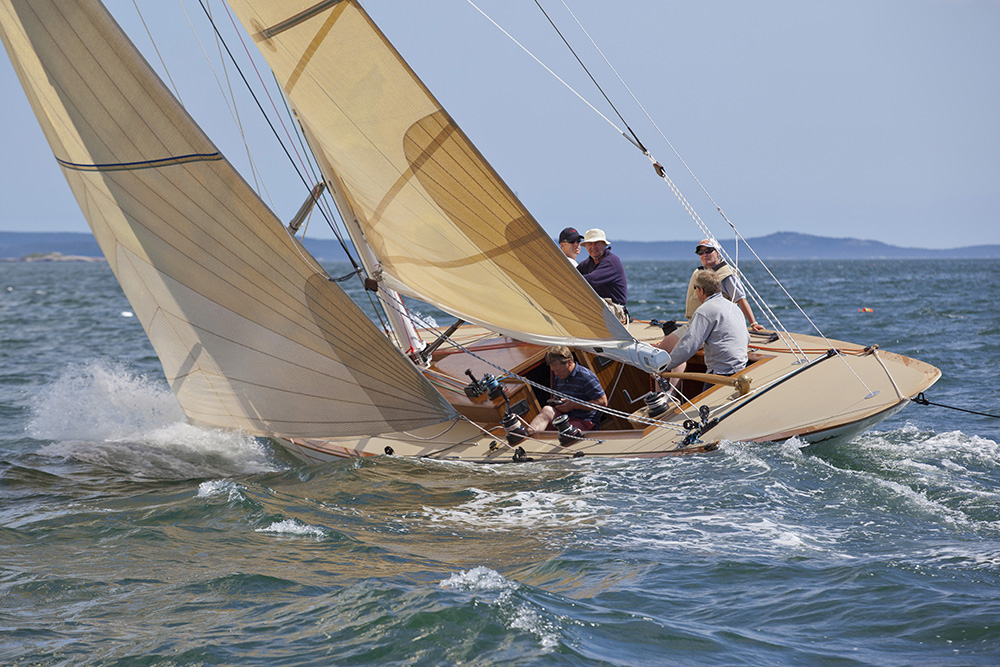 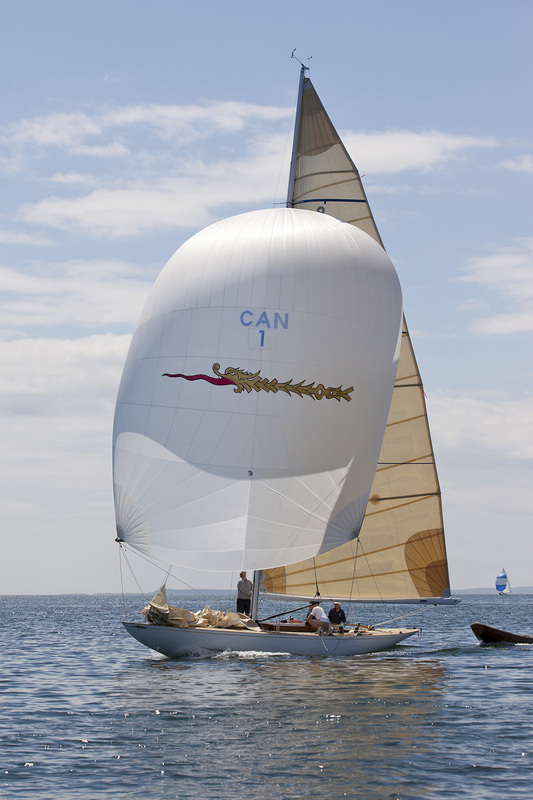 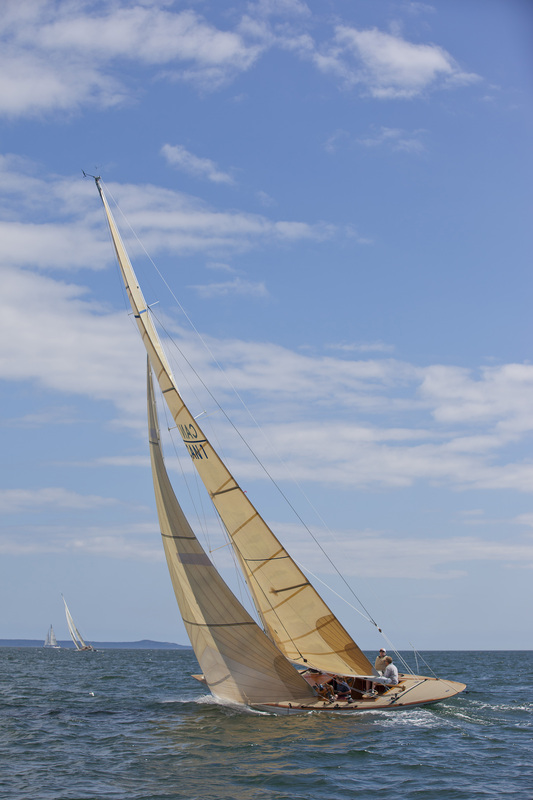 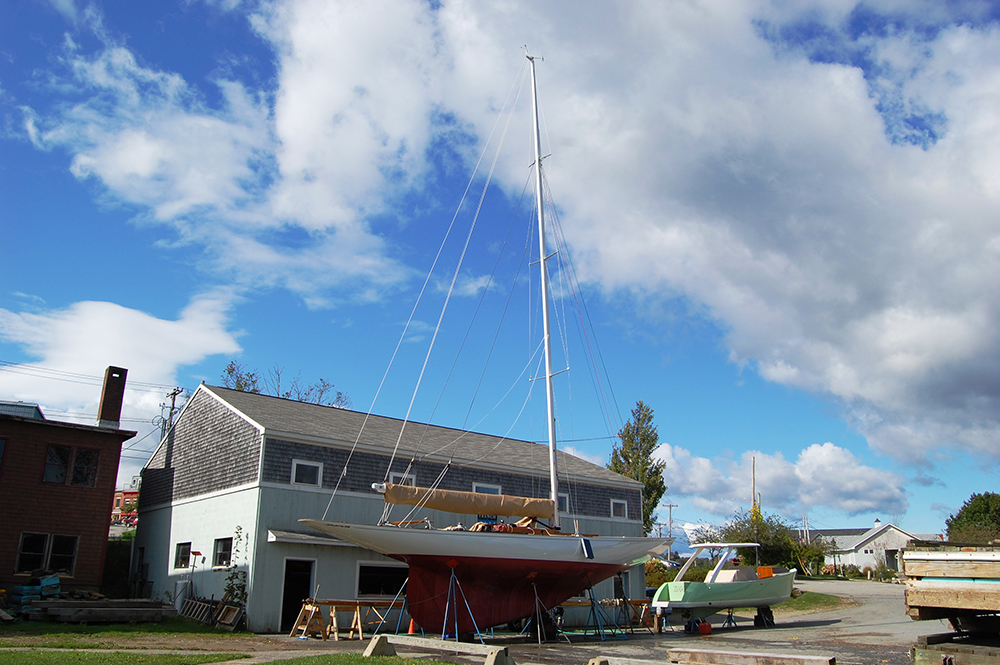 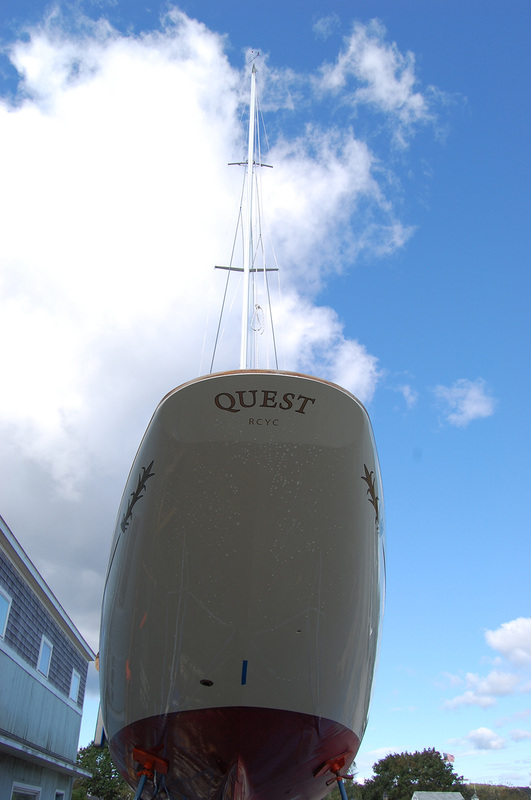 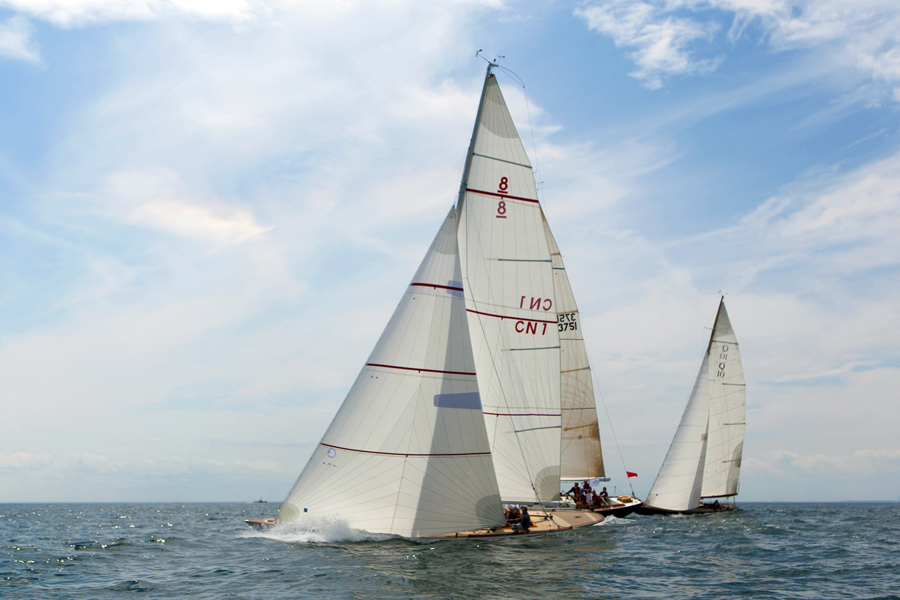 Quest Restoration
​During the early era of Victorian yachting, William III was born to the Fife family of Scotland, boat builders who had risen to preeminence in the world of British yachting.  As a young man, William Fife III underwent an extensive apprenticeship that included naval architecture and mathematics before he returned to Fairlie to run his family’s boatyard.  As yacht racing became of interest to the public, bigger and more complex designs emerged, and Fife III was well prepared to carry his family’s enterprise further.  His education in engineering was amplified by uncommon talent, and the prestige and success of yachts designed and built by Fife spread.

Fife yachts have long been esteemed as among the most beautiful in the world.  It is an often-quoted edict of William Fife that success amounts to a boat being “fast and bonnie.”  Many Fife yachts are also large and ocean-capable and as a result are appreciated and admired everywhere.  Only perhaps Nat Herreshoff in America was more enthusiastic to experiment with light and strong construction.  Fife specialized in composite construction, usually with metal framework to support double planking.  Metalwork in all kinds of alloys was a Fife hallmark.  It was a rare Fife yacht that didn’t mix the strength of engineered metal with the resilience of perfectly fitted wood.  Fife designed two America’s Cup challengers for Sir Thomas Lipton, garnering even wider attention for the excellence of Fife’s work.  He was particularly adept at the design of boats to the “meter-classes,” particularly the 6-8-Meters, during the height of the second International Rule (1920-1934).  The 8-Meter class was formed in Scotland in 1907 and became extremely popular in the yachting world.  Fife designed and built the vast majority of those 8-Meters that consistently won, causing some to call it “the Fife class.”

An intriguing example of Fife III’s genius, the 8-Meter Quest was recently restored by French & Webb in Belfast, Maine.  Quest, Fife design number 777, is one of three “eights” owned by Ronald and Diane Palm, and is one of an active fleet of 8-Meters that race in the summer out of the Royal Canadian Yacht Club in Toronto.  Quest has lived on Lake Ontario since 1930, never seeing salt water until 2011.  She is indeed fast and bonnie.  There may be no more intriguing example of “wineglass” hull sections in any sailboat.  The yacht has a huge and hugely effective rudder, which is indicated on a drawing to have originally been a baulk of teak.  Quest was restored with the goal of racing.  To this end, Canadian yacht designer Steve Killing, along with project manager Joe Tomaselli and restorer Todd French, improved the structure of Quest for modern day Sira Cup racing.  Keep in mind that Fife was a bit like an aeronautical engineer wrapped in an artist’s cloak.  Had he lived beyond the year he passed away, 1944, he surely would have been all over titanium, aluminum, and Spectra.

Quest’s method of construction bears witness to the Fife pedigree.  The framing consists of Fife’s favorite intermix of one sawn frame and two bent frames.  In the restoration, French & Webb laid newly splined tight planking over those frames to the customary exquisite Fife standard.  The restoration included replacing the entire centerline structure, forefoot, keel, deadwood, and horn timber, as well as the transom, sheer planks and sheer clamps.  French & Webb were presented with a typical Fife challenge in the form of lots of galvanized mild-iron floor and frame connections – all of which had to be replaced with bronze.  The restoration also included restoring the 10,000 lb ballast to its originally designed form, constructing an entirely new deck frame and decks, and creating a new interior and cockpit.  French & Webb completed the process by outfitting Quest with a new engine and new electrical, electronic, and mechanical systems.

The restoration of Quest was completed in time for the yacht to race in the 2011 Camden, Maine Feeder Race for wooden boats.  With restorer Todd French at the helm, the boat won the race, going to weather like a dragon at sea.  William Fife III used a stylized dragon as the “header” of his cove-stripes.  Thanks to Fife, Steve Killing, French & Webb, and the Palms, when Quest isn’t racing on distant seas, that dragon will be wagging its tail at the 8-Meters assembled off the Royal Canadian Yacht Club in Toronto.